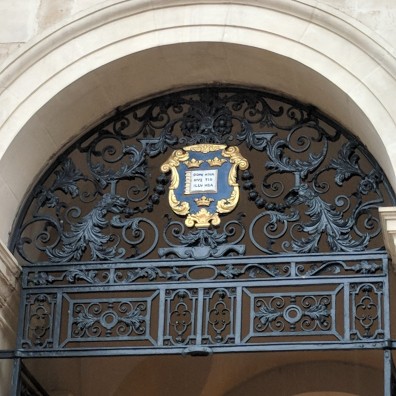 Oxford University was founded in 1096, and like all great universities, was founded in the only real Truth:  God’s Word.  This is evidenced by its crest, which says, “Dominus Illuminato Meo” — Latin for “God enlighten me.”

The Martyr’s memorial tells a different story, however:  One of politics and intrigue in the name of Christ.  In the 1500s, Henry VIII was excommunicated from the Catholic Church because he secretly divorced Catherine of Aragon so that he could marry Anne Boleyn.  Anne had been his wife’s maid of honor (an actual maid, not a wedding attendant). During this time, three very influential leaders of the church supported the king, rather than the laws of God.  Two of these men were graduates from Oxford University, and one was a graduate of what locals call “the other place” (Cambridge University). Their names were Thomas Cranmer (Archbishop of Canterbury); Hugh Latimer (Bishop of Worcester), Nicholas Ridley (Bishop of Westminster). Henry was able, with the help of these men, to drum up enough power and influence to oust the Catholic leadership from England and put himself in control of the church. Upon Henry’s death, his nine year old illegitimate son, Edward VI, succeeded him.  After dying of tuberculosis, Henry’s daughter Mary took over the crown.  Determined to bring her country back to Catholicism, she tracked down the three bishops and had them burned at the stake in the very public streets of Oxford University.  This and other acts of violence in God’s name, is what earned her the nickname “Bloody Mary.” Does any of this sound illuminated by God? Hardly!

Four floors of the College of Architecture (each using different distinct styles of pillars and pictured closely in the following pictures). If you were a student at Oxford, would YOU believe to identify your columns? Which one is which?

On the academic side, Oxford is a very intentional place.  Even its architecture teachers.  For example, the columns on the four levels of this university building, when seen close-up, are balanced in whole, but that each set of columns is designed differently from the other.  This is so that Oxford’s students of architecture can easily learn to distinguish the four different styles.  The Tuscan style, for example, is very plan and undecorated.  The Doric style is also plain but has vertical lines. The Corinthian style, in opposition, is very fancy and ornate, and the ionic has scrolls at the top.

We may not have ended our tour of Oxford feeling enlightened by God, but we did come back to our temporary home tired, satisfied, and very educated indeed.  Imagine if we had spent four years here!