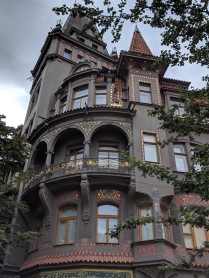 A remnant of the ancient wall around the city 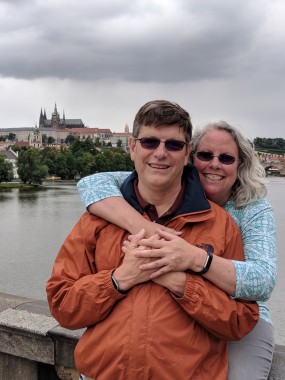 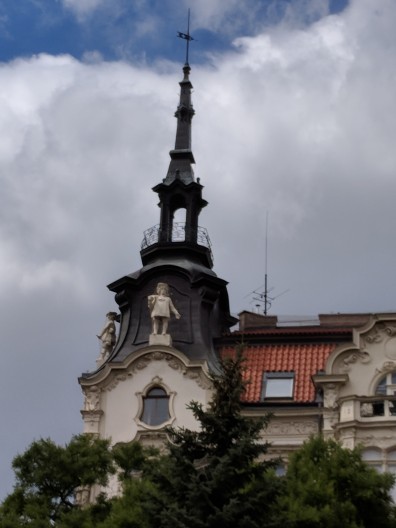 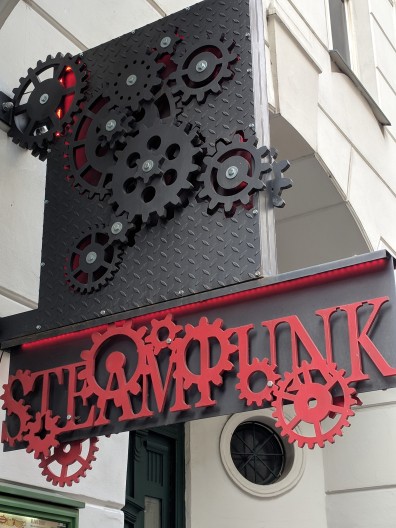 Our daughter Jacinda loves steam punk. The pictures of this shop are for her. 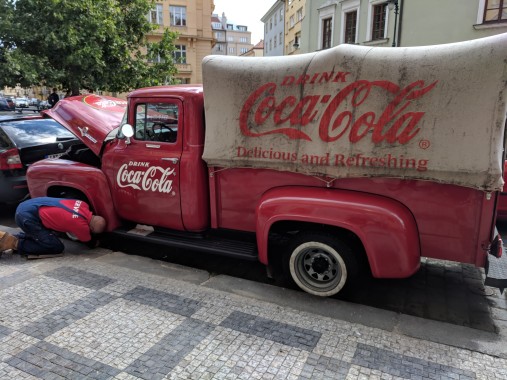 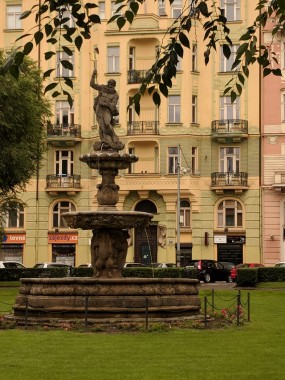 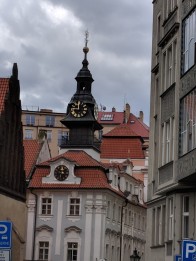 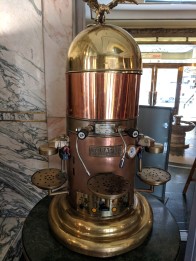 We found Eva’s favorite coffee shop. This is an espresso machine from who knows how long ago.

A chilling memorial to the victims of communism

This was a day we would never repeat, but in some sick way, when it was over, we were glad we had experienced it.  We started the day with one more wander around Prague, seeing some of the out-of-the-way places we had missed previously, including a chilling memorial to the victims of communism. We found a beautiful little gardenWe ended the day, however, on a train to Poland.  We had already been traveling 27 other days, but none were like this one.  In our infinite wisdom, we thought to ourselves, “It takes eight hours or so to ride a train from Prague to Krakow.  Why would we waste a whole day on a train and then rent a hotel room besides?”  So we paid the extra $80 or so for the four of us to share a sleeper car.  That way — or so we thought — we would wake up in the morning, already where we wanted to be, and start exploring Krakow.  Brilliant! 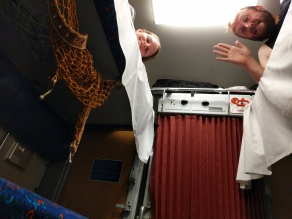 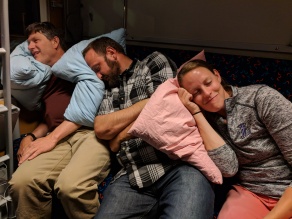 Here’s what we discovered once we boarded the train:  Bunk beds were stacked three high — so close together that we couldn’t even sit up in bed.  We decided it must be bed time, and we proceeded to “make” our beds for sleeping.  This entailed opening a sealed (thank goodness) plastic package of 2 clean sheets and a pillow case for each of us.  The sheets ALMOST covered the well-used, stained mattresses on each of the “beds.” The things we stuffed into the pillow cases were pillows in the loosest sense of the word.  Really, I think they took the pieces of foam left on the floor of a cushion factory and tossed them, along with a needle or two that had accidentally been dropped during production, and sewed them into tiny packets of whatever fabric they had left over.  Then they dropped the packets on the floor again…maybe the floor of the bathroom…or a puddle or two…  Finally, they picked them up and shipped them off to the train station.  Here, they dragged them across the floor and through several train cars until they finally threw them onto the sticky linoleum floor of our car.  Okay, I might be exaggerating a little bit, but not much!

Next, we were visited by our conductor, who warned us that we should lock our train car and latch it with the extra chain provided.  Not only that, but we should sleep with our phones, laptops, and other valuables under our pillow because the train is known to have thieves.  Comforting thought.

We decided we should brush our teeth before bed, so we headed down to the water closet, where we were greeted with a sign that had a glass full of water and crossed out.  I believe that meant you could wash your hands with the water but not put it in your mouth.  So much for teeth brushing.

We snuggled in for the night, if you can call it snuggling when you lie, not quite stretched out, on a board that is thinly covered with…ummmm…well I’m sure there was something soft on the “mattress” somewhere.

Let’s just say it was a long night.  We’ve been on cruise ship beds before, so we somehow, ridiculously, expected this to be similar.  We thought the movement of travel, for example, would somehow rock us to sleep.  Not so much.  It was loud.  It lurched.  It went around corners that sometimes made us feel we might fall right out of bed.  We didn’t talk to one another, so all of us thought the others were somehow miraculously sleeping through the night.  I was afraid to go to the bathroom in the middle of the night because doing so would require me to leave the car unlocked with only my family, who I thought was sound asleep, to guard our valuables.

In the morning, Bill and I checked our Fitbits.  His said he had gotten one hour and 8 minutes of sleep.  Mine said I hadn’t slept since the night before!  So, why are we still glad we did it?  We are travel agents.  If our clients ever ask about night trains, we’ll know exactly what to say.

Epilogue:  In all fairness, we did take another night train later in the trip.  Other than the conductor speaking only Polish and not being able to answer our questions, it was a different experience. It seemed much cleaner; Bill and I could sit up in bed (not true for Savanna and Jason in the top bunks); and most of us slept enough to make it all the way through the next day without dozing every time we sat down.  And we got a bonus:  There was a Russian family in the next cabin who had gotten tired of the magic tricks their thirteen year old son insisted on performing for them.  His dad decided to find him a fresh audience, and we were it.  Thmooeh Kopobhm (we’ll call him Timothy) performed several magic tricks for us, and he was very good.  We asked if he performed magic professionally, and he gave us his business card!  He wasn’t a professional just yet, and his card was completely in Russian, but he did have online presence on what his dad called “Russian Facebook”.  Maybe someday we’ll see his name again and be able to say, “We knew him when…”. Not only that, but maybe there’s hope for night trains if you’re willing to be adventurous and take your chances…?