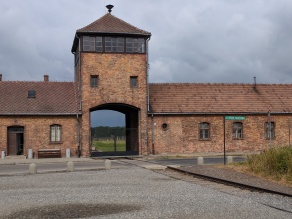 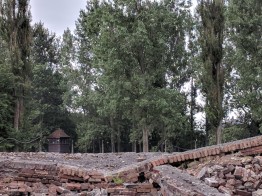 On September 1st, 1939, Germany invaded Poland.  It only took 35 days for domination.  Once German occupied Poland, it was decided that Poles, unlike Jews, would be allowed to live if they were able to work. However, any Polls who had fought against the Germans and any Poles living in nice neighborhoods that German families would need to be relocated to a work camp.

On this day, our tour guide, Wojtek, picked us up from our “home” in Krakow to visit one of these camps.  We were not looking forward to our visit, but we felt we had to do it in honor and memory of so many who had experienced the horrors of this place.  He took us to a little town called Oswiecim, which the Germans had renamed, for their ease in pronunciation, to Auschwitz.  Sadly, this little town’s only claim to fame is that it was it hosted three concentration camps.  The first camp, which we now know as Auschwitz, was called Auschwitz I and was a work camp.  The second, known as Canada, was Auschwitz II, a set of warehouses to store items taken from prisoners.  The third, Birkenau, or Auschwitz III, had only one purpose: extermination.

We went to Birkenau first.  It was early in the morning, so we arrived before any tour groups.  This huge, empty, deathly quiet place kept the five of us silent too.  As we walked past row after row of the ruins of what we thought were barracks, we mistakenly pictured people living there in squalor.  The truth was much worse. There was very little need for these barracks, other than for prisoners who were helping to run Birkenau.  Most of the people who were sent to Birkenau had just finished a trip in a train car for up to nine days with 50 to 100 other people.  They had been told they were being relocated.  They had brought all the belongings they could in all the suitcases they could carry.  In each train car, there was usually one bucket of water and one empty bucket for waste.  Sometimes, up to 75% of these people didn’t even survive the trip.  Those who did survive were expected to carry the dead off the cars.  After all this time in such horrible conditions, no wonder they followed gladly when they were sent to “shower” after their long trip.  They were told to leave their clothing and luggage in a processing room.

They soon discovered, however, that as many as 2,000 people were sent to each building for these showers.  They would realize that something was terribly wrong, that no one could shower in those conditions, but it would be too late to do anything about it.  Then a soldier of the Third Reich would go up to the roof and release a canister of hydrogen cyanide into the pipes.  After twenty minutes, the bodies would be prepared for disposal.  There was a systematic process for removing any hair and/or gold teeth, jewelry, or precious stones.  Their clothing, shoes, and luggage were checked for anything usable or valuable that could be given either to the coffers of the Third Reich or to the thousands of German families who were being relocated to “Germanized” neighborhoods.  Then the bodies were removed.  At first, Birkenau was not built with crematoriums, so bodies would simply be piled high.  Once the stench was so bad that fish in nearby fish farms began to die, crematoriums were ordered to be built. 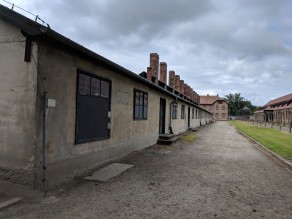 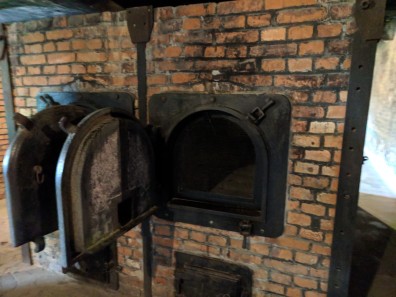 Birkenau was not the first camp in this area.  In fact, it was the last.  It was only built because the numbers of Jews Hitler wanted to be exterminated was so much higher than the number of chambers available.  One hundred Czech resisters had been taken prisoner and forced to build it.  Birkenau was a well run machine.  For example, a “shipment” of 440,000 Jews left Hungary.  It is unknown how many survived the trip, but within 56 days, all were gone.  In most cases, the German soldiers kept meticulous records. These Hungarians, however, were never even registered.

Once we had learned about each of the three camps, we decided the ones who were shipped straight to Birkenau were the lucky ones.  They never experienced life in a concentration camp, and their deaths, while not painless, were relatively quick.

The second camp we visited was Auschwitz.  It had originally been built to relocate Polish people from Krakow and Warsaw to work camps for two reasons:  First, they were to become slave labor for the Third Reich.  Second, their homes would be taken by German families who were being relocated into the area, a strategic location on the border of what Hitler called “The General Government” and Russian territory.  In Oswiecim, which was directly on the border and already had an army garrison and railway, they razed eight Polish neighborhoods to make room to expand the camps and meet their requirements.  For the first two months, it only housed relocated Polish people.  Eventually it became a camp for prisoners of war and resisters.

Upon arrival, prisoners would pass under a gate inscribed with the saying, “Work will set you free.”  Then they would be told they were in a work camp and that if they were Jews, they might last a week.  If they were priests (known for sheltering Jews), they might last two weeks.  Everyone else would last three months if they were lucky. It was extermination by work and starvation.  They were told that the only way out was through the chimneys and that if they didn’t like it, they could go on the wires of the electric fences surrounding them.  Then they worked, many to their deaths.

Every day, they would be commanded to march to the beat of a band playing a lively German march and line up for roll call.  Every prisoner must be accounted for, even if they were dead.  Imagine carrying your dead bunk mate to roll call so they could take him or her off the list!  If anyone was missing, everyone would be expected to stand at attention until the missing prisoner was found.  One day, the prisoners had to stay in roll call for 19 hours while they searched for one who was unaccounted for.  He had escaped, like 143 others did, but the consequences for the remaining prisoners was severe.  Any prisoners who shared barracks and/or work details with people who had escaped were forced to count off.  Every multiple of ten was tortured and hung from the gallows, killed by lethal injection, or shot as a punishment for not keeping each other in line.  The torture was usually 50 lashes with a whip.  The prisoner would be forced to count the lashes in German, and if they made a mistake, the count would begin from one all over again.  There was one priest, Father Maximilian Kolbe, who begged to die in place of the father of a family.  The Germans accepted the deal, and his sacrifice earned him sainthood by the Catholic Church.

I saw too many things in the second camp that filled me with horror and sorrow.  I’ve been programmed on this trip to take pictures of everything I see that is memorable.  In fact, Bill has already told me he was glad I am writing this blog because we’ve started to be confused about what we’ve seen where. In this place, however, I will never confuse what I saw with anything I’ve seen anywhere else.  In fact, sometimes I wish I could unsee them.  There were only two places where I wasn’t allowed to take pictures; however, there were several places where I lifted my camera automatically, took aim, and could not click.  Something in me didn’t want to share or preserve these memories.

The final camp we visited was called Kanada (German spelling for Canada) because it was the land of prosperity and wealth.  This was huge warehouses for confiscated goods.  Prisoners lucky enough to be selected for Kanada would be charged with sorting through the belongings of other prisoners and storing the items accordingly.  They were allowed to eat any food they found, and some would find ways to smuggle the food to other prisoners.  They were expected to take out the soles of shoes to find any valuables prisoners may have hidden there.  They removed gold from teeth and even made the hair that had been shaven from other prisoners into rugs.  Believe it or not, these human-hair rugs were all the rage in Europe.  Prisoners assigned to Kanada usually fared better than other prisoners because they had extra to eat and their work wasn’t as physically demanding.

How was it decided where each prisoner would go?  Train cars would arrive at Canada.  A camp physician would decide your fate.  If you were a twin, or if you possessed qualities that would aid Dr. Josef Mengel in his human experiments, you were automatically sent to work with him.  He did research on multiple births, so if you were a twin, it was automatic.  He also did a variety of other research, such as the effects of poisons and bombs on human beings, as well as injecting them with bacterial infections, malaria, and typhus so he could find cures for them.  Once he was done experimenting on a prisoner, he would kill them with lethal injection.  Everyone else was either pointed to Auschwitz I to work, or to Birkenau, likely to die. If a prisoner was a Jew, not strong enough to work, or too young or old, it was Birkenau.

We were sickened by our visit to this ill-fated town.  We were thankful that it was finally liberated by Allied Forces, and we felt vindicated by the fact that the commander of this facility was brought back to it, hung on the gallows created just for him, and died overlooking the camp he had so cruelly lorded over.  That feeling of vindication, however, only lasted a moment and was soon replaced with regret that any part of this atrocity had ever happened and stubborn determination that it would never happen again.