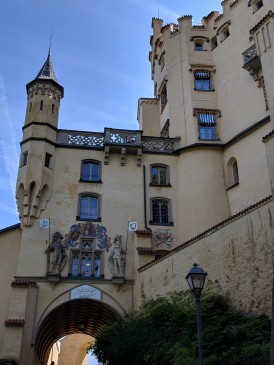 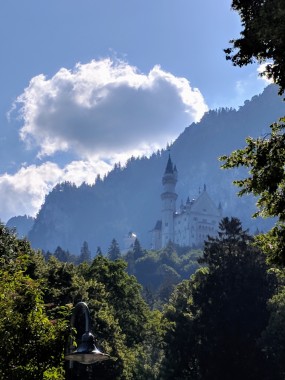 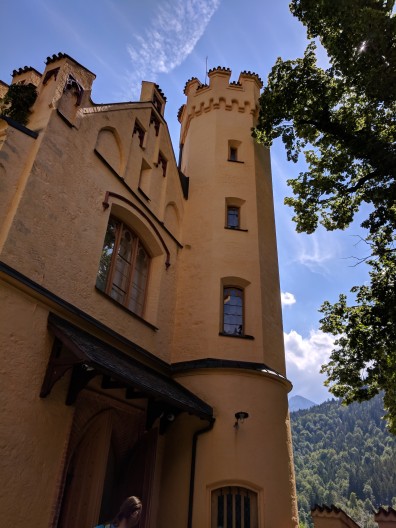 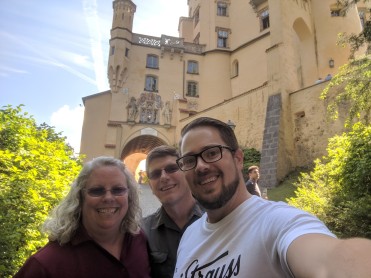 On this day, we got to meet our friend Curtis.  It felt like another little taste of home.  Curtis was good friends with our son, Levi, in high school.  He was at our house almost as much as Levi was, so he became one of our “adopted” sons.  Two years ago, he relocated to Germany when he married his wife, who grew up there.  His wife was on a business trip while we were here, but it was such a treat to be able to spend time with this special young man and hear about all he had accomplished since we saw him last.  We’re so proud of him!

He’s pretty proud of his new country, too, so we were given a two-day royal tour of Bavaria, which is a state in the southern region of Germany.  Today was castle day, dedicated to King Ludwig II, who grew up in a castle but wanted more.  We first visited the Museum of Bavarian Kings to get a little better understanding of the history to which this king was born.

I’ll try to summarize and simplify this long and complicated story as much as possible:  Back in the sixth century, this part of Europe was made up of hundreds of little kingdoms, each one with a castle and its own ruler.  A lot of their castles and city walls can still be seen all over this area, including Memmingen, the town we were staying in.  Then in 788, the area became part of the Holy Roman Empire, and each of these kingdoms got a governor that was called a king of Bavaria.  In 1188, the ruling of Bavaria was given to one family, the Witelsbachs, who passed it down from generation to generation, often dividing it between sons.

In 1848 Maximilian II, one of the many descendants of the Witelsbachs, became king of Bavaria.  His son, Ludwig II, was born in his Munich castle but grew up in the family’s other beautiful castle called Schloss Hohenschwangau, up in the Alps.  When his father died, he was only nineteen years old.  He wasn’t really prepared to rule a kingdom, especially since what he really loved was music and the arts — not politics, and definitely not public events.  His best friend was the German composer, Richard Wagner, who had his own guest room in his castle with him.  His mother outlived his father, so she lived in the basement of the castle.

Ludwig never married, and he and his mother didn’t get along well, so he commissioned two lavish palaces, and he decided he needed a castle of his own as well — one that was even fancier than his dad’s. He commissioned his own fairy tale castle, Schloss Neuschwanstein, which included a theatre for Wagner’s operas to be performed, a literal “man cave” hewn into rock, a huge festival hall with a chandelier that weighed over a ton, and more.  The location for this fairy tale castle was in viewing distance of the first, so he had a telescope installed in his bedroom so he could oversee the details of its building.  The castle was worked on for 17 years before he decided to move into it, even though it wasn’t yet finished to his specifications.  He lived in it for 172 days, but he had put his kingdom so far in debt that his ministers declared him insane.  He escaped their confinement but was later found dead in the nearby lake under “mysterious circumstances.”

Ludwig’s younger brother became the next king, but he was also mentally ill.  Two prince regents ruled on his behalf.  One of the prince regents, Prince Luitpold, became king when he died.  Luitpold’s son then ruled until the end of World War I, when it became a Democratic Republic.  What a complicated but interesting history!

We were exhausted after hiking to each of the castles, as well as to the bridge across a gorge because it would be a great vantage point for taking pictures.  We drove to an overlook near Curtis’s town, bought doner kabobs (again), and brought them to a lakeshore to eat.   It was more like a seashore, this lake was so huge!  Lake Constance borders Germany, Austria and Switzerland.  It is over 800 feet deep, covers over 200 square miles of land, and even has tides!  We ended our day watching the sun set over this beautiful lake.