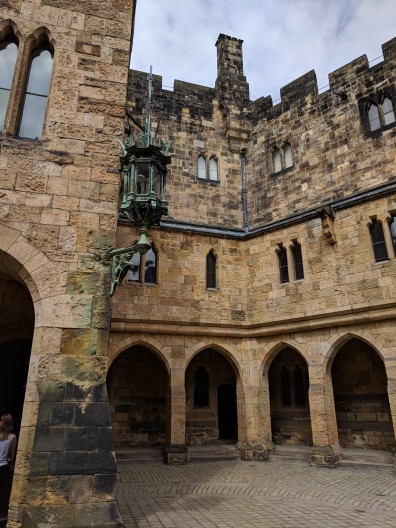 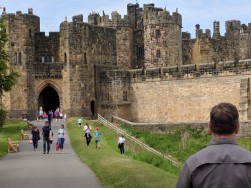 We couldn’t take Hogwart’s Express, but we did somehow make it back into England to the Hogwart’s School of Witchcraft and Wizardry. It’s also known as Alnwick Castle (pronounced Onnick), and it has actually starred in 20 or so other movies besides Harry Potter, including Robin Hood, Prince of Thieves, Transformers:  The Last Knight, Downton Abbey, West World, Star Trek, and more.  This castle is actually lived in by the Duke and Duchess of Northumberland to this day.  It was a little weird touring their home, seeing family pictures, dishes, even a foosball table used by visiting grandchildren, but they do have private quarters we didn’t see, and I guess letting the castle be used and seen helps to pay the bills.

The castle was built in the 1100s by William the Conqueror, an illegitimate son of the Duke of  Normandy.  A friend of his, King Edward the Confessor of England, sought refuge with William when his kingdom was overthrown by Viking invaders.  In exchange, the childless King Edward promised William his throne upon his death.  He later goes back on this promise and names someone else, but William doesn’t let that stop him.  Through brutal battles (including the Battle of Hastings, where the newly crowned king is killed by an arrow through the eye), political alliances, and involvement from the pope, William wins the throne and punishes his enemies by cutting off their hands and feet.  Don’t mess with Bill. 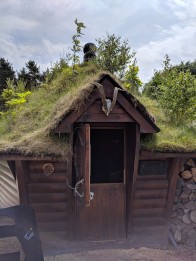 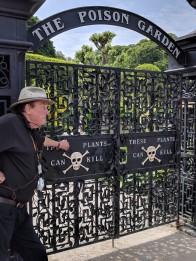 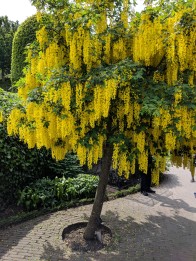 Mandrake: Its roots are shaped like a human, and it screams when pullled up. It will kill you, but not by magic.

The oldest tree in the garden: A sycamore dating back to the 1700s

This beautiful fountain greets visitors upon entrance to the garden

The castle, owned by the Percy family since 700, prides itself on its Hollywood fame, its popularity  with young and old, and its beautiful gardens.  The day we visited, we walked over 10 miles, enjoying the castle, abbey ruins along the way, a wedding house, beautiful scenery, and more.  This sightseeing stuff is good exercise! 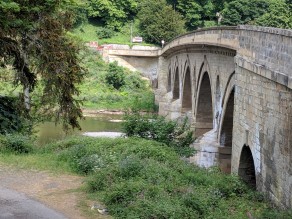 Bridge over the River Tweed, border between England and Scotland

A beautiful view of the River Tweed

Scottish wedding house: You had to be 18 in to marry in England but only 16 in Scotland. Young couples would sneak over the border, marry, and return to England legally married.

Kelso Abbey was built in Scotland close to the English border (to show off a bit). That was a mistake because it was also the target of too many battles. Hence, the ruins we see today.