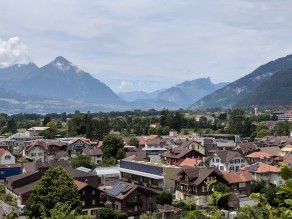 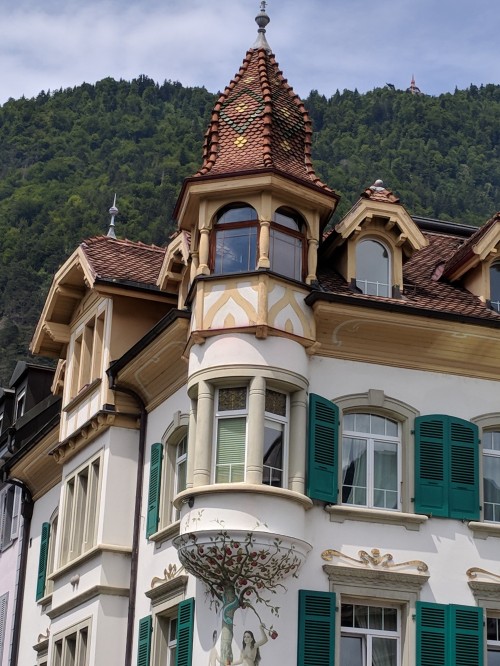 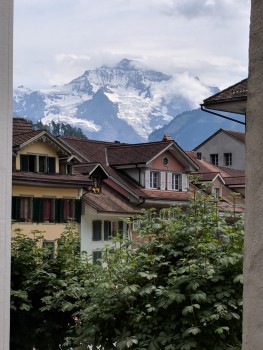 Still on our high from Zermatt but sad to say goodbye to Jason and Savanna, we headed to our next “home” in Bern, the capital of Switzerland.  We had heard that Interlaken was a beautiful city too, nestled between two mountain lakes, so we decided to make a stop there to have a look around.  We stopped by a grocery store (You guessed it, more cheese) and began a hike uphill.  We discovered the town gallows, set up on the hill overlooking the city so that the criminals hung on it would die thinking about who they had harmed and what they were leaving behind.  We couldn’t imagine eating lunch at the town gallows, so we continued higher.  We ate lunch with a beautiful view of this Swiss town and the surrounding peaks.

When our lunch was gone, we spent some time walking around the Old Town area of Interlaken.  The river runnning through the town was a beautiful blue that I’ve never seen in the states, and I realized why Crayola calls one of their blue colors “glacier.” It turns out the water from glaciers is muddy in the high elevations because of the debris of rocks and dirt the glacier cuts away from the mountains.  But once the river has traveled away from the glacier a bit, and the debris has settled, it is just as blue as the water kissing a tropical beach.

Satisfied we had explored Interlaken, we hopped back on the train and continued on to the big city of Bern.  When we checked into our hotel, we got the lowdown of what to see there, but we had to do some laundry first.  It turns out that doing laundry doesn’t HAVE to be a sweaty, boring chore!  Upon our host’s advice, we took the tram to the Wash Bar.  Seriously!  It was a bar!  We threw our dirty, smelly clothes into Sally and Abigail (yes, their washers all have girl names) and ordered a beer.  We didn’t even have to add soap, since Sally and Abigail were so high-tech they could add it themselves when appropriate.  We sat and talked in this air conditioned bar, watched a little World Cup soccer, and before we knew it, it was time to pass the laundry job from Sally and Abigail to Wilson and Herby (yes, all their dryers are boys). We were surprised Sally and Abigail didn’t do the transfer themselves, but we needed to stretch our legs anyway.  As Wilson and Herby dried our clothes, Bill beat me at two games of foosball.  When our laundry was finally done and loaded in our backpacks again, we paid our bill. It was only 19 Swiss Francs, which is about the same as $19 dollars, and that included the beer!  What a painless way to do laundry!  We realized there’s another business we need to bring back to Estes Park with us.  So many startup ideas, so little time… 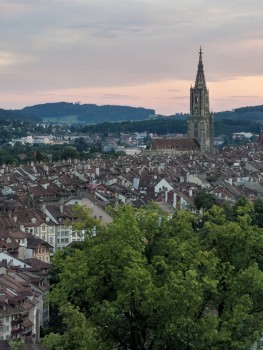 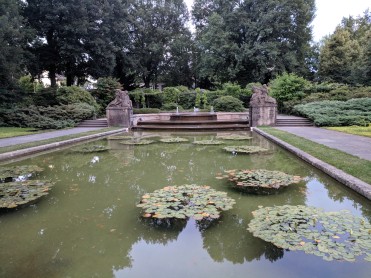 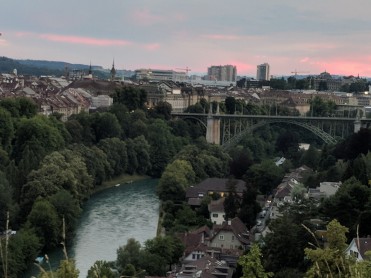 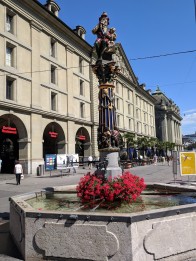 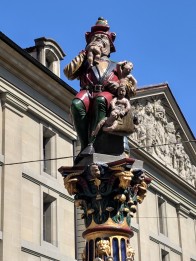 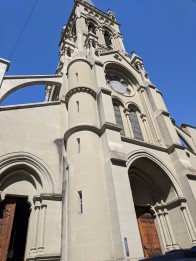 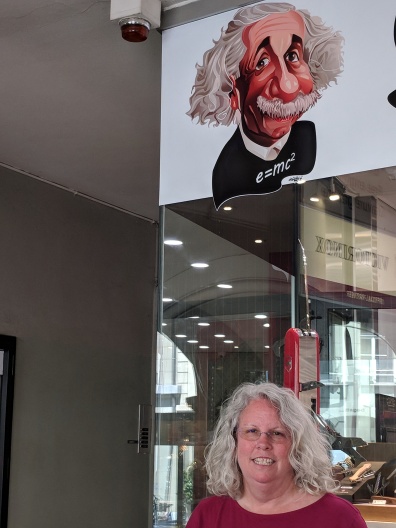 We ended our evening by hiking up to the rose garden overlooking the city of Bern.  I’ve never smelled roses quite that fragrant, there was a beautiful fountain to fill our water bottle, and the view of the city as the sun went down was picturesque.

The next morning, we walked up and down the streets and bridges of Old Town, enjoying the architecture and fountains of this medieval city (Yes, there is a fountain of a dude eating babies, based on a folktale about a guy that punished children at Christmas time who had been bad all year).  We also toured Albert Einstein’s house.  We decided we’re glad we’re not geniuses because their brilliant minds get them into such trouble in real life.  He failed school, went to finishing school because Zurich college wouldn’t accept him otherwise.  He graduated and got into college, but then he wasn’t accepted as a research assistant when he graduated because he had only average grades and was too hard to deal with.  It was only after his work on the theory of relativity that he was allowed to teach a class, but it was canceled because there were only four students willing to keep up with him.  He lost jobs, ruined his marriage, and wasn’t really even discovered until Lorentz, the man whose work he had studied and tried to extend, recognized publicly that Einstein had surpassed him. One thing we did realize is that, now that my hair is gray, there IS a slight resemblance.  Maybe I descended from his long lost daughter? Is that why I’m so brilliant (chuckle, chuckle)? 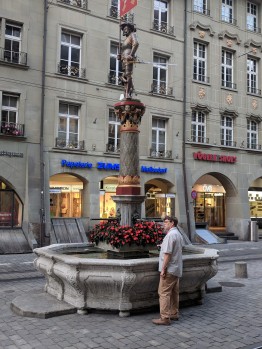 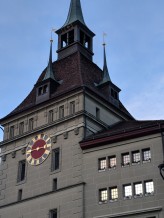 After a nap back at the hotel, we took the funicular up to the mountain opposite the rose garden.  The view was even more spectacular from there, and we took it in while enjoying a delicious buffet meal on the veranda of the self-service restaurant.

On the way back “home,” we stopped on the other side of Old Town and checked out the beautiful Parliament Square.  Government buildings for both the city of Bern and the country of Switzerland surround the square, and there is a line on the ground that lights up at night to illuminate the connection between federal and civic responsibilities.  There is also a 26 jet fountain:  One jet for each of the cantons (like our states) of Switzerland.  Together, they create a “dance” of water and light for anyone who visits the fountain.

Once again, we headed “home” exhausted and ready for a good night’s sleep to prepare for our next train trip to Salzburg, Austria.