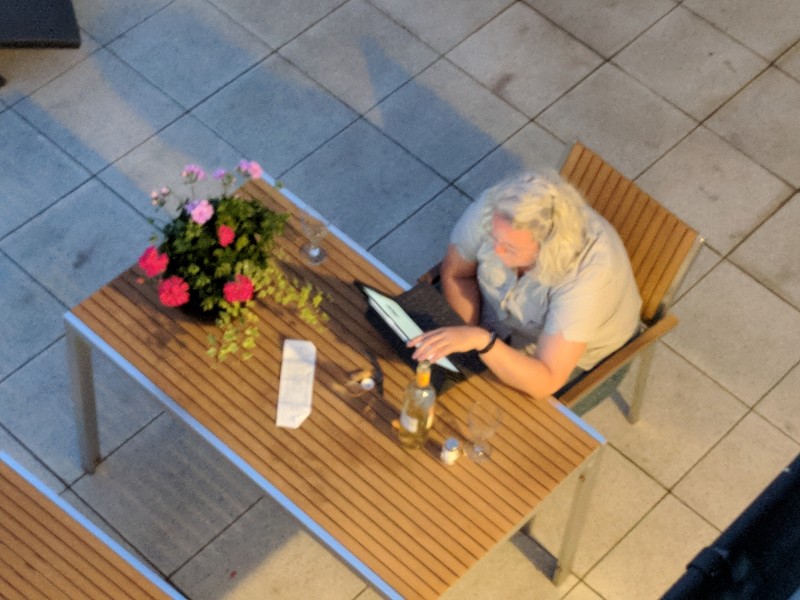 Bill took this picture from the second floor of our beautiful terrace outside our new “home” in Prague.  I’m writing after a VERY long day of travel from Paris to Prague.  Here’s the story of our journey.  I hope it will make you laugh some, but I hope it doesn’t scare you away from travel!

t’s a good thing we had Allen (our French host) to guide us.  During our visit with him, he helped us find the most important of the ninety-five World War II museums to see in the short time we had.  Then, when it was time to move on, he gave us even more guidance.  It proved to be critical.

You see, the trains in France are run by the government, who believes it’s important to invest their money in more and more high-speed trains.  The people who work on the train system, however, believe it’s important to invest their money in better maintenance on the existing trains, as well as better salaries and working conditions for the employees.  This disconnect has resulted in French train employees working a full schedule for only three days, followed by a significantly reduced schedule for two days — their way of striking without freezing the entire transportation system.

Thankfully, Allen knows all of this, as well as which three days are affected by strike.  We had a 3:05 flight to catch from Paris to Prague, so we were excited about having a more relaxed schedule in the morning.  He knew better.  He looked up the strike schedule and said that in order to catch a flight by 3:05 in Paris, we would have to catch the train in Caen by 7 a.m.!  He was also concerned that we would struggle getting gas to fill up our rental car that early, so he insisted we have breakfast by 5:40 a.m.  I guess we’ll have to go home to get some rest!

It was a good thing we followed Allen’s advice.  We were on the road by 6 a.m. for a town only 20 minutes from his little bed and breakfast. We stopped at both gas stations we found along the way.  Both gas stations required detours to find, and both stations refused our American credit cards!  Time ticked by, and we finally gave up.  We had to drop our car off at the car rental agency with a half tank of gas.  They put a $500 charge on our card and then finally released it…AFTER they had charged us $130 to fill it up!  Ouch!  To top it all off, we literally ran from the rental agency to the train station. We arrived, pouring sweat, a minute after the scheduled time.  To our glee, there we saw Allen and his wife.  “Don’t worry!” Francois called out.  “It’s ten minutes late!”  Keep running!  You can make it!  Never have we felt more blessed to know a local.

Our adventure didn’t end there.  Our train wasn’t a direct route to the airport but instead required a transfer to a metro train.  The metro train, which said it would take us to CDG Airport, stopped short and asked everyone to disembark.  We wandered around the train station trying to find a new train that would get us to the airport, and we weren’t alone.  The problem is, we all seemed to speak different languages.  We found an employee who we thought understood what we were asking, and she pointed in a general direction.  We walked that way and… nothing.  We found someone else who would mumbled some directions.  We tried to follow them.  We finally hopped on a train and said, “Charles de Gaulle?” We got some nods, so we stayed on.

Because we hadn’t had access to internet, we hadn’t been able to check in ahead for our flight.  When we arrived at the Charles de Gaulle airport in Paris, we began looking for check-in for Czek Air.  It was nowhere to be found.  We finally sat down, connected to WiFi, and went through the “Czek-in” process electronically.  Terminal 2B! Whew! All we needed to do is find Terminal 2B! It was also nowhere to be found.  We must have walked five miles through the airport looking for this tiny airline in its nonexistent terminal. We found 2A, 2C, and 2D, as well as a construction zone that must have previously been Terminal 2B.  When we finally gave up and asked for help, we found that Terminal B airlines had been moved to Terminal D.  Were there no signs to this effect? Or did we just not understand those signs?

I know what you’re wondering:  Did we ever make the plane?  We did!  By beginning our day at 5:40 a.m., according to Allen’s advice, we made a 3:05 flight.  We got on the plane, breathed a deep sigh of relief, and were deposited in Prague in time for dinner and bed in our new “home.” Here’s what we learned:  When traveling internationally, it is important to remember that it isn’t always about the destination.  Sometimes, it’s all about the journey.  Oh, and one more thing:  Don’t stress out about it. Instead, laugh when it’s all over!  That’s what we chose to do.